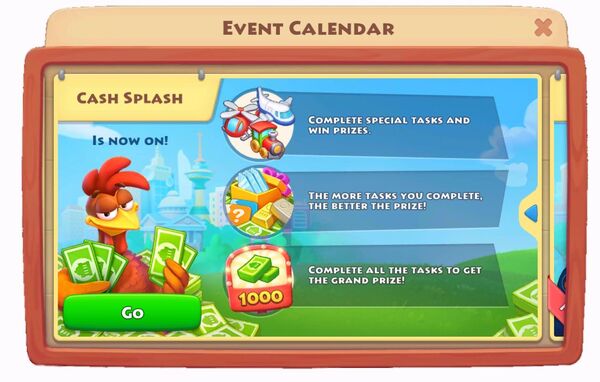 The event was supposed to last for 3 days, but has been cancelled by Playrix because of "some technical issues", they were telling players on the support chat that the event will "return shortly" after they fix it, but most people have already gotten a note in the game (starting 18th of July @ 08:00 UTC) that doesn't mention any reopening of the event, and gives 3, 5 or 10 TCash as "compensation" depending on level. The note and TCash is being sent to everyone, including people that got the 1000 TCash final reward. So far, people that had already gotten their rewards haven't been raided.

Cash Splash is an event in which you get rewards such as cash and construction materials by completing tasks.

It consists of 12 stages. Every stage requires you to complete the same task which is earn coins but with increasing quantity, depending on your town's current level. You get the grand prize 1000 Tcash after completing all 12 stages before the event ends.

The number of coins needed for each stage are based on your town level. Rewards also vary.

Use laboratory boosters to help you complete tasks faster.