Play Color Splash at the fair! Fill it with colored blocks, beat levels, and collect stars. The more stars you win playing levels, the more prizes you get!

As you progress you will come across 7 obstacles to remove to reach the goal in certain levels including:
Balloons, Toys, Cannons, Crates, Bubblegum, Ice, and Strong Crates.

There are 3 types of powerups including: Rockets, Bombs, and Fireworks.

To combine powerups they must be beside each other. There are 6 types of powerup combinations including:

There are 4 types of super powerups including: Hammers, Tractors, Planes, and Magnets.

All powerups can be bought with Tcash.

Levels reward 30-35 stars. As you progress harder levels reward 40-55 depending on the amount of moves left. 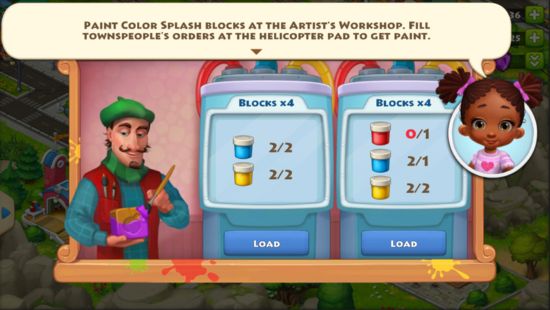 Get blocks to play this game by painting them in artist's workshop using paints. All customers' orders at helicopter give paints. They ask for all kind of products during the event including temporary event products below, so it is recommended to prepare them.

Play and earn stars to win holiday prizes! The level difficulty determines how many stars you get. The more levels you beat, the bigger the reward you'll get in the tournament!

Launch more rockets than your friends! The more rockets you use, the higher your position on the leaderboard. When you lose, rockets aren't counted towards your score. Rockets launched by matching rocket+firework or those produced with remaining moves aren't counted. Please use up all your moves to launch rockets if possible.

The tournament unlocks once you've completed your personal goal.

Go to the tournament icon/tab and compete against 29 same-level players. If you place in the top three by the end of the event, you will receive greater rewards.

You can view the decorations for this event at:

Retrieved from "https://township.fandom.com/wiki/Color_Splash_Event?oldid=80573"
Community content is available under CC-BY-SA unless otherwise noted.