Fields are received once your population reaches the required amount. See the Fields page for further information.

Each house takes a required amount of time to be built. After it's completed, it becomes possible to get fields depending on the number of population added. 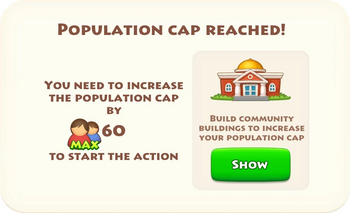 You will receive this message if you attempt to build a house when you do not have enough population. You will need to build more Community Buildings to increase your population cap before you are able to build the house. 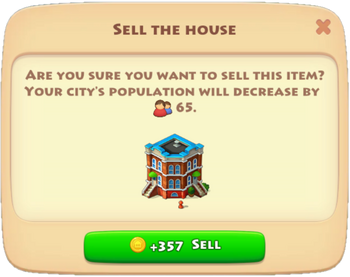 When you sell a house, you will only receive half the amount of the actual price of the house (same as when you sell decorations for example) and your population amount will decrease.

Population amount has impact on how many fields you have, however, your existing fields will not disappear even if you no longer have population for them. You will not be able to add new fields until your population reaches the required amount.

In addition to this, population has impact on whether you can build a particular factory or not. When you finish a Community Building, you get a message that your population has increased by x. Sometimes, you can't get to that amount of population by combining newly available houses so your factory development might be delayed for a couple of levels. In that situation, you can easily calculate which small house you need to sell in order to build bigger ones so your population increases by x.

Once you have built all the houses and have max amount of fields you can sell the houses you don't like. However, if new update comes with added fields or factories or expansions you will need to repurchase the houses.

Want to expand faster? Then don’t forget to work on your town’s population!


Community content is available under CC-BY-SA unless otherwise noted.
Advertisement